Its my religion, I can cry if I want to. 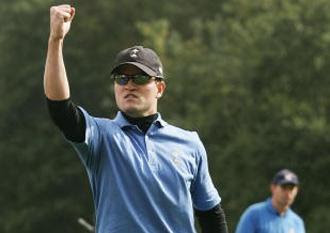 Zach Johnson said something in his interview after winning the Masters that got the attention of the Christian Blogging commuity. At Think Christian there is some dialog about how Zach Johnson briefly mentioned his Christian faith. They were referring to the blog called Redeeming Prufrock where Ben Humphries suggests that when Zach Johnson said "I was not alone out there. Jesus was with me every step of the way." that CBS cut him off and did not ask any more follow up questions. He also noted that "His voice broke, and he cried."

You can see the actual interview here and a longer interview at his Jacket presentation here. You can judge for yourself if CBS cut him off or discounted his expressions about his faith. And a more humerous look at Zach Johnson reading the top 10 things I can say now that I have won the masters list on the Letterman Show


What I really wanted to look at is the emotions that bring about tears. Tears are often associated with deep spiritual experiences or transformations. There are tears of sorrow, tears of relief and tears of joy. There are probably all kinds of connections with tears.

When I was younger there seemed to always be this question when we had Bible quiz competitions or Bible baseball games at church school. The question was, "What is the shortest verse in the Bible?" The answer generally given is John 11:35 in which the verse says, "Jesus wept." (On a side note Job 3:2 is technically shorter in English and says, "He said,") This verse is associated with the story of the raising of Lazarus from the dead. 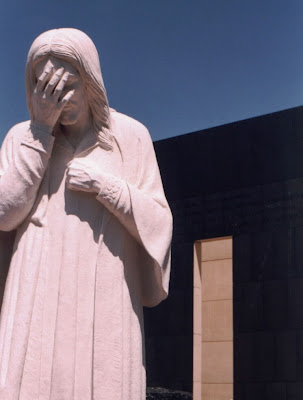 In this story Jesus is sent word that Lazarus is sick and asked if He would come quickly to heal him. The message said, "Lord, the one you love is sick." The narrative says that instead of going right away, Jesus stayed where he was for 2 more days before traveling to where his friends were. When He arrived Lazarus had been dead for 4 days and eventually Lazarus' sister Mary came to meet him and she was weeping. When Jesus saw this, He was deeply moved in His spirit. It is at this point that "Jesus wept."

Now, there are all kinds of theological reflections on this point and why Jesus was weeping. In some he was weeping because of their lack of faith and they didn't understand that He had the power to raise the dead. In some this proved that Jesus was a man with bodily functions. In others He is weeping for Lazarus because he has to come back from Paradise.

While there is no way to prove if this story actually happened there are a number of things to draw from this narrative. It certainly addresses the fear and loss that come from death. What hits me on a more personal level is that from the book of John its clear that Jesus knows that he is going to raise Lazarus from the dead. He doesn't seem to be in a hurry to point this out when He arrives. In fact, He takes time to weep with Mary and the others with her. The author of the book of John seems anxious to point out the lack of faith on the part of the Jews who were there.

And yet it seems that it was important for Jesus to weep with Mary, even though He knows that He will bring back her brother to her in a few moments. Maybe there is something to be gained from grief that is important. Maybe weeping is part of what comes before being raised from the dead. Maybe something far more complex and profound happens in that moment that Jesus connects with Mary than all the theological explanations that follow. Its seems clear that Jesus was moved to act, not from a need to explain, but from his connection with Mary and her sorrow.

In this world today, I believe that if we would connect with each others sorrows we would act quite differently. We might be able to raise ourselves and others from the dead.
Posted by Richard Harty at 10:25 PM No comments:

You have probably realized by now that the letter to the Wittenburg Door is an April Fools joke. When I first got the letter I had to read it a couple times to get that it was an April Fools prank by the folks at the Wittenburg Door. When I went to the Focus on the Family website, it was closed down. (possibly due to the amount of traffic) I was hoping, on the far chance that I got the email on March 31, that it was true. I was hoping that James Dobson had done a turn around. I was hoping that I could send a letter of encouragement to him offering my support for his tremendous courage and honesty. As I read the various blogs about this I noted that this same hope came up a number of times. And for those who were fooled, they were fooled because, they too, were hoping that James Dobson had done this turn around.

Maybe enough people actually sent James Dobson letters of encouragement for this April Fools letter that he might actually shift his course a little. It has been said that it only takes a 2 degree shift to go in a different direction. It is unfortunate that he has taken such a severe stance on a number of issues. As I looked around I came across these interesting pieces on the reaction various researchers had when James Dobson quoted them in a Time magazine interview.

With suicide attempt rates going up for teen lesbians (as high as 1 in 4) and 31 percent of gay teens being threatened or injured at school it seems like there should be some Christian response besides condemnation. I remember when I was in college and I talked with a gay friend that was going to Pastoral counseling. It was suggested by the Pastor that he buy a Playboy magazine. Even at 19 this suggestion seemed pretty ignorant and contradictory.

I received an email from Bob Darden, senior editor for the Wittenburg Door. This is what it said...

"We have tweaked our friend the Rev. James Dobson pretty regularly in the past, particular for his involvement in politics. And when Dr. Dobson called for the resignation of the Rev. Richard Cizik, president for the National Association of Evangelicals because he believed that Cizik was spending too much time worrying about global warming and not enough time spent on “core” Religious Right issues, such as abortion and same-sex marriages, we gigged him pretty hard then, too.

However, we received this e-mail this morning from Dobson’s Focus on the Family ministry and we think it is a remarkable document. It is probably the most honest, most revealing statement ever made by the normally carefully controlled Dobson.

So, in the spirit of Christian reconciliation, we’re making available Dr. Dobson’s complete statement, without editorial comment. Perhaps he should rename it FICUS on the Family
– Robert Darden, Senior Editor"

And here is James Dobson's statement...

"Colorado Springs, CO – Dear friends and supporters:
Since my ill-advised attack on my dear friend Dick Cizik a few days ago, I have had an extraordinary week of reflection and spiritual enlightenment.

Through the counsel of godly men, such as the Rev. Dr. Jack Hayford, the Rev. Rick Warren, Richard Stearns (President, World Vision), David Neff (Editor, Christianity Today) and other members of The Evangelical Climate Initiative (www.Christiansandclimate.org), I’ve come to see that my assessment of Dick’s motives and, in fact, “global warming,” have been in error as well.

I have been guilty of a particularly pernicious form of short-sighted Dispensationalism, believing that since the earth has no future with the blessed Second Coming nigh, we, as Christians, have no responsibility to care for Creation.

Through loving testimony, instruction and careful study of the Bible with these and other mentors, I no longer believe that Dick is – as I said earlier, much to my regret -- guilty of a “relentless campaign” to save the planet at the expense of what I called more “serious” issues, such as same-sex marriage. I see now that I have strictly exploited those issues and others like them to manipulate my audience and as a calculated and callous form of fund-raising.

As part of my penance for my unmerited attacks on a courageous, godly man, I have initiated contact with both the Rev. Jerry Falwell and Don Wildmon, with the earnest desire to convince them of the error of their ways as well. While both continue to condemn what they call “earthism worship,” I will continue to pray that this revelation will be made available to them as well.

As for the rest of my penance, I will devote the rest of my career – however long the Lord sees fit to continue in this capacity – to working with my Christian brothers and sisters to insure that all life on the planet, God’s first and greatest gift to us, is protected and cherished.

God bless you all,

James Dobson has been known to have said that same-sex marriage will destroy the earth. James Dobson's statement, "I see now that I have strictly exploited those issues [same-sex marriage] and others like them to manipulate my audience and as a calculated and callous form of fund-raising." is particularly revealing. I have come to believe that many of these "serious" issues taken up by mainline Christian organizations have been used to create fears so that they can raise money. I have noted that issues like child abuse, mistreatment of women and minorities, helping the poor, and other "liberal" issues have had far less emphasis. I believe there has been little emphasis on these because they are prevalent in the church and/or they don't have the money draw like fighting gay people who are supposedly taking over the government.

If this change for James Dobson is for real, the coming months may offer some interesting changes in the public persona of Christianity. One might want to note the date of this news release...
Posted by Richard Harty at 12:30 AM 4 comments: