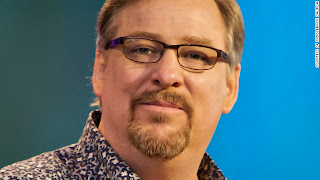 I was posting back and forth with Ted Haggard on his blog about suicides of children among a number of top Christian leaders. I'm actually quite sympathetic to Ted Haggard and both families he mentions in his blog. Rick Warren and Joel Hunter both lost children to suicide this last year. In human terms there really are no words that can describe how this must feel. In my comments following this I want to be clear that I'm not suggesting their public actions and responses are willfully destructive. I really believe that Rick Warren and Ted Haggard are following their convictions and the destructive ideas come from the version of dominant Christianity so prevalent in the United States. There is a great saying that states a good man will do good things and an evil man will do harmful things, but it takes religion to make a good man do harmful things.

What I find disturbing is they so often use these tragedies to become their new ministry. Even Ted Haggard has used his fall as a springboard for his new ministry. It's like the Christian version of releasing a sex tape to promote your career. I don't believe either is being this crass and they are authentically trying to make sense of each of their own tragedies within a toxic system of belief called Christianity. I believe they are victims of their own beliefs as much as their followers.

The problem with guru type ministries is they are personality driven and foster codependency in a top down spiritual program. It's not fair to the followers or to the leadership. I grew up in a family that was a Christian leadership family and the pressure is enormous not only on the leader, but their family. The pressure on Rick Warren to spin everything into some purpose is rather disturbing to me. I completely understand why his son would have difficulty with depression. The pain of never being just good enough is tremendous because the bar just keeps getting raised. I don't know the details of his son Matthews disease, so this is more about me and my experience, but I would guess being the son of such an public superstar of Christian perfection would bring with it a certain set of expectations. It is entirely possible that his son Matthew had a form of mental illness that would not have responded to any treatment no matter what culture he was living in.  The problem is that Rick Warren teaches that god mixes your DNA together specifically to carry out his purposes.  This means that if his son Matthew had an incurable mental problem this problem was put there by God.  This is a horrible idea.  The alternative is something else caused this breakdown.  I think it is very likely his culture created a schism between who he was and the high pressure gig of trying to be the distortion of a purpose driven life.  Purpose as Rick Warren defines it is based on a literal interpretation of the bible filtered through a complex fallacy of contradicting ideas.  There is an excellent analysis of Rick Warren's methods by Daniel Dennett in the last video of this post.

There is an intensity to Christian "niceness" and the insistence that everyone loves you which shuts down authentic expressions of the whole gamut of human emotions which include "negative" ones as well. Christianity tends to label everything as either "good" or "bad" which tends to add shame to emotions of anger and sadness and sometimes even happiness which is labelled as silliness. The hyper intense pressure to make everything "meaningful" really leaves little room for just having fun, which to me is some of the most authentic expression of joy I experience as a human being.

When you take this Christian stuff seriously it creates personality disorders no matter how much someone tells you that you are loved unconditionally. It's simply not believable as long as the public standards contradict unconditional love. It creates the situation where one has to be in two minds. One mind is the nice interpersonal one and the other is the public angry god one easily sustained by quotes from the Bible. There's also the underlying expectations of perfection that distort honest interactions within Christian communities. Spirituality or what I call awakening to oneself is not something given to you from the outside and that's what these top down guru systems are. I have painfully learned that one has to engage themselves and take personal responsibility for creating their own meaning without trying to fit that narrative to someone else's, no matter how well intended. It's time that these frankly cultic systems of super Christianity are dismantled.

The tricky thing about being in leadership with perfectionistic systems is one doesn't really recognize that it's ego driven. It's much like addiction. I know that when I was a Christian, because I was taught Christianity was THE answer, I was always expecting Christianity to deliver what it promised. And each new super evangelist or program came along claiming to be the TRUE Christian message and the reality was I was still human. They would give me a temporary "high" and then the ultimate crash because there is no external system of thinking which can bring you real joy. Thinking and explaining is simply not capable of figuring out how to make you happy. And this whole system is sustained by those who would say, but you didn't experience the TRUE Christian faith or you must have been harboring secret sin or one of an almost unlimited list of circular arguments unintentionally designed to keep one dependent on the authority of the church and the Bible and/or the particular flavor of guru that has the Christian public's attention.

I leave with the CNN interview with Rick Warren and his wife. And following are a few examples of the type of circular reasoning he uses. He is does it nicely, but these types of belief systems are crazy making. They are crazy making because they rely on fallacies in reasoning to sustain themselves. There will always be parts of the inner self that know these ideas are not true. It's when the culture of belief uses fear and manipulation through shame to cause one to disbelieve their own sense of truth that personality disorders begin to emerge. At least that is my belief based on my own struggles and my own observations. In the 2nd to the last video he explains why he had a statement on Prop 8 and skillfully avoids really answering through some forms of double think. His statement follows which is full of fallacies and inaccuracies. I consider Rick Warren to be very talented at what he does, but he is an enabler of toxic belief systems and uses rational fallacies that appear to be nice and true, but the end result is a toxic circular belief system that creates a prison of shame.

Rick and his Wife on the death of their son.

Rick Warren on homosexuality.  Note how he doesn't really address the conflict between the possibility of homosexuality being a natural variation and still considering it a sin.  He says it wouldn't bother him if there was a gay gene, he would still say it was a sin.  He states that he doesn't believe having an attraction is an sin.  Acting on it is.  He also ignores the fact that Jesus said attraction was sin in the bible.  Jesus said that if you even lust after a woman you have committed adultery.

Rick Warren on Prop 8  While he admits he can't really hide behind the idea that his messages are only for his congregation, he still put it out there.  He tends to be really good at shifting his ideas for his audience and yet retains a loose plausible deniability.

Rick Warren's statement on Prop 8.  Notice he doesn't use this type of language in his interview above.  This kind of goes against his claim of authenticity.

Posted by Richard Harty at 12:16 PM No comments: