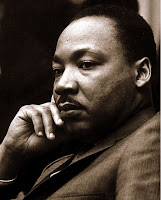 My wife and I have participated in a fairly large scale Christmas Pageant for the last 11 years. It involves building sets, rehearsals, writing scripts, writing music, sound effects, stage effects, lighting, audio engineering, costumes, and putting it all together. This year we will retire from this particular creative process. My wife Karey has written a new script every year and this year she wanted to connect the influence of the philosophy of Jesus to its influence on various world figures including Jesse Owens, Amelia Earhart, and Martin Luther King, Jr. as part of why one might celebrate the birth of Jesus.

In the Pageant there are various moments that bring about all kinds of different emotions including tears, joy, sadness, and laughter. Most times something unexpected happens in almost every performance. In this particular excerpt from 2 years ago you can see how my youngest son Keith dealt with a falling pillar...

Even though this could have been a potential disaster, Keith was able to take the moment and make it enhance the performance. He was questioned a number of times if the falling pillar was actually part of the act. I think there is something to be learned when one contemplates how this might apply to life in general. Things that may look like disasters might actually have some opportunities for enhancement.

A number of years ago I realized that I was not doing what I wanted to do. I was not only working out of obligation, but was in conflict with what I believed to be the right thing to do. With this awakening I decided to leave what I was doing and begin doing what I found joy in doing.

What I realized was when I did what I found joy in, the quality of my work went up and instead of attracting clients and business to something I found little joy in, I attracted clients and business to what I liked doing. This seems so simple when I state it this way, but I think we as humans have a tendency to get trapped in single minded ways of seeing the world.

There is a great web site called TED: Ideas Worth Spreading that has a number of videos on different ways of seeing things. This particular video presents some ideas that show how our current educational system often robs us of our ability to think creatively.

This video really hit home for me as I have learned to remodel how I experience life. No longer is a mistake the horrible thing to be avoided at all costs and no longer is a falling pillar the end of the play.
Posted by Richard Harty at 11:21 AM No comments: