Before you read futher, if you haven't seen the video above before, watch it.

When I grew up one of the explanations offered for the existence of evil was that the natural tendency of humans was toward evil and one had to be saved from this inevitable depravity.

I can't stop watching this video because it brings such emotion and a feeling of wishing this man well. Its obvious that his confidence is pretty low and its pretty painful for him to stand there in front of everyone. And then he sings and something almost magical takes over. You see the wonder wash over the audience and then you feel the reaching out toward him and the incredible happiness the audience and the judges have for him. Even mean ol' Simon.

I have a hard time believing that people are naturally depraved after seeing this. If this were true, everyone would be jealous of him. But, at least for this moment, I would guess that almost every person in that room was rooting for Paul Potts. Here is someone who looks like everyman that sings like Pavoratti. It's very moving to see someone realize their dream.

Life has these moments that remind me that there is real beauty in this world. This is one of the most beautiful moments that I have seen in a long time. We do like happy endings...

The Fear of the Unknown 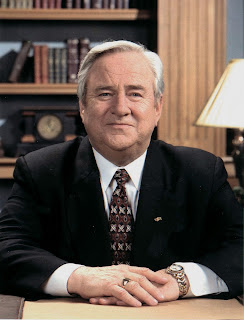 Fundamentalism seems, to me, to be an expression of fear. The fear of mystery. The idea that I have to know for sure. One expression of this idea was presented to me in the statement that, "One who believes they have the truth will stop searching for it." With the passing of Jerry Farwell, I am hoping that the fundamentalist movement might be able to shift away from the belief that they "know" the truth.

I have been reading the blog of naked pastor after being directed to it from the Think Christian blog. Being naked, one of the more powerful symbols of exposure and the risk of shame, is very appropriate for the thought experiment taking place on his blog. It is with great interest that I have read his willingness to be, sometimes brutally, honest about what he is thinking and feeling. It is encouraging to see something that appears to be an authentic and honest exploration for truth.

From comments on his blog there is a restrained discomfort with some of his "reveal" ations. To me this is evidence that he may be hitting pretty close to home. In my own personal experience I have found that the areas I most resist are often where I need to go. The point of pain is at the resistance. In that context the pain, from a certain view, is self inflicted. Freedom from that pain comes in the form of letting go of the resistance. In other words going into a new place of mystery.

There are some things in what I call the spiritual world that appear paradoxical in what most people call the "real" world. There is the idea that to gain control one needs to let go of control. Or as a paraphrase of a famous person, "Who ever tries to save their life will lose it and who ever loses their life will save it." Or trying to be authentic will prevent you from "being" authentic. In other words, activities that are too self-conscious block that which is already there. 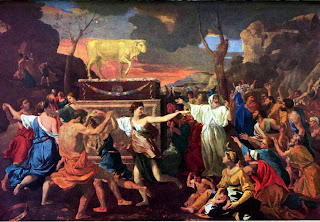 What I have observed myself and others do, in our attempts to be "better," is what I call high pressure theatre. What others have referred to by saying that in trying to be more than human we become less than human. To me this is the great tragedy of fundamentalism. In its attempt to control truth it loses the truth and substitutes an image to the truth. An image that, to me, is more like an idol than any sculpted representation of a god. The difference is that the idol formed is a walking breathing human being that has learned to act out an illusion. It looks "nice" and appears "good" but at the cost of a real life. In trying to gain the perfect life one loses a real life.

To me, the great evidence this is something that is not real is that, at its core, its based on fear. What I have observed is that when one comes to the place where they believe they have the truth, all other opposition is suppressed with various forms of violence. It creates bigotry, prejudice, and other forms of fear reflecting its heart. If we are to truely know something by its fruits, then when I look at the fruits of fundamentalism, in history, I see a lot of violence.

To me, living in mystery is to be humbled. To deny mystery and claim absolute truth is to choose something far less complex than the what is observed. In fact one has to blind themselves to the complexity around them. In this context I see humbleness, not a virtue, but as a prevention of self deception. 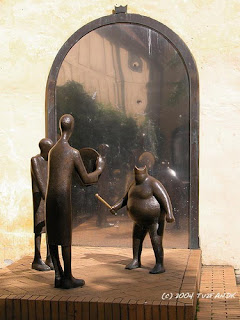 So I hope the naked pastor stays naked because, to use the story of the garden, maybe we can, once again, walk naked without being ashamed.
Posted by Richard Harty at 5:56 PM No comments: