The World according to Wayne Bent 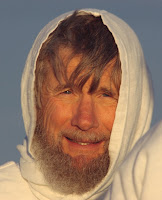 According to Wayne Bent (Michael Travesser) on his most recent post on the Strong City web site he has stated...

"Today, I began a fast, as I did when I was in the heart of the earth for three days and three nights. I will now abstain from eating until the child Willow is returned with no strings attached, or until God brings the deliverance that I seek from the present evil, or the answer to my inquiry of justice is clearly manifested, or I am gone from this life altogether."

Hopefully there are enough loopholes in this for Wayne Bent to end his fast before he kills himself by refusing to eat. I find it doubtful that Willow will be returning any time soon. And this announcement is probably one of the most manipulative moves that Wayne Bent has made. Unfortunately there are a number of his followers who have committed to this path, including Gabriel who has been dialoging with me denying that they would ever commit suicide. It appears that they are at least willing to state that they will take their own lives through starvation if Willow does not return or if Wayne dies there appears to be a much more disturbing commitment as stated by Esther in which she posts...

"Here I stand with you, Michael, I can do no other. I will not eat until you do again and should you pass on, I will be with you there also. To do any other I would have to go against my heart and soul."

What I fear is that these people are unreachable. They seem to be able to hold a number of contradictory beliefs all at the same time. Here are a few examples of their doublethink.

Jeff Bent states that Michael did not have sex with his wife and yet Wayne Bent posts in his Testimonies...

"Some said that I would have intimate sexual relations with the seven messengers. Some thought the vision concerned others. But I say unto you, every person must have sexual intercourse with me, or they will have no life in them. My Seed is the only life, for my Seed is life indeed, and my flesh is meat. Anyone who does not receive of my Seed, will be left desolate."

Or they state that they are following the Bible and yet clearly participate in adultery.

Or they state they are telling the truth, while at the same time telling blatant lies that are so transparent because they tell on themselves.

The coming case against Wayne Bent for illegal sexual contact with minors is partially due to this "double think" stated in the following...

"Why did the Father arrange for two of the messengers to be under age? If all of the messengers had been over age, then I would only be accused of sexual perversion, but sexual perversion of itself is not illegal. The country is full of it. What was being proposed by God was something illegal, because the girls had not yet reached the age of 18, and that lent force to Satan's arguments against it."

This tendency to hold opposite beliefs to be true, both at the same time, is dangerous, particularly when they can hold the belief that they are not going to commit suicide and then set forth on a course to do that very thing.

Is there a way out of this for any of them or has their commitment to Michael and their statements to the world placed them beyond reach?

Former members of Strong City have stated that the reason they could leave was due to some traumatic event.

"As I consider what it was that helped many of us break free from Wayne’s mind control, it comes to mind that it was usually a traumatic event that woke us up to the fact that something was way out of line with God’s word. It was a crisis event that shocked us into the realization that we were off track."

We will see how this plays out. Hopefully the crisis of Michael's conviction will break the spell without anyone losing their life. If he is convicted he has basically stated that he will not live in jail. This sounds serious to me. While it is easy to see Wayne Bent as the bad guy, I think he really believes what he is saying and is probably just as vulnerable to harm as the others. The emotions and the fears are running so high among the group, I hope there are no drastic actions to follow. Its apparent that former member Prudence Welch is seen as playing the role of Judas Iscariot. But, hopefully the former members have been able to maintain their contacts in a positive way.

To me this graphically illustrates the extreme dangers of religious belief that has no accountability and uses shame as the motivational tool to find "spirituality."
Posted by Richard Harty at 2:52 AM 7 comments: